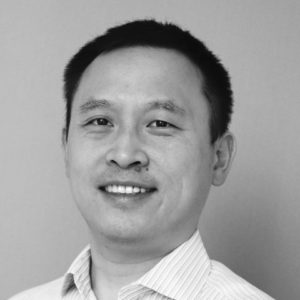 Hailiang Huang is an Instructor in the Analytic and Translational Genetics Unit at Massachusetts General Hospital and Director of the Stanley Center Asia Initiatives at the Broad Institute of MIT and Harvard. He is also an instructor in the Department of Medicine at Harvard Medical School.

Hailiang’s research focuses on the genetics of complex disorders, especially autoimmune and psychiatric disorders. He is interested in developing new statistical and analytical methods, and use them to pinpoint and understand the genetic factors driving human complex disorders. His studies usually use large-scale omics data from various consortia and publicly available sources such as UK Biobank, NIH Roadmap, and GTEx.

Hailiang developed GWiS, a gene-based association test that has been used in many consortia to find genes associated with human complex disorders (Huang et al., PLoS Genetics, 2011). He is a member of the International Inflammatory Bowel Diseases Genetics Consortium (IIBDGC) and has co-led its recent fine-mapping effort to resolve known genetic associations to variants with high causal probabilities (Huang et al., Nature, 2017). He is also leading a workgroup in the Psychiatric Genomics Consortium (PGC) to build a large-scale Asian schizophrenia cohort and use this cohort to understand the genetic architecture of schizophrenia in the Asian populations. Hailiang’s other research interests include developing methods for testing rare variants with population stratification, investigating the connection between tissue-specific gene regulation and non-coding genetic associations, and understanding the genetic mechanisms underlying the spontaneous clearance of the hepatitis C virus.

Hailiang received cross-disciplinary training combining engineering, genetics, and medicine. He earned his Ph.D. from the Department of Biomedical Engineering at the Johns Hopkins School of Medicine, supervised by Dr. Joel Bader. He completed his postdoctoral training with Dr. Mark Daly at MGH and the Broad Institute.